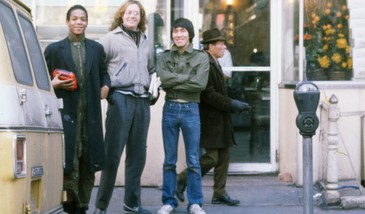 We’re thrilled to present a program that emphasizes what Sled Island does best: showcase the work of emerging homegrown and international talent, present one-of-a-kind cinematic and musical experiences and explore art and music through film.

This year’s theme? We have a few. Counterculture, 20th century icons, emerging talent and collaboration all make appearances in this year’s film program.

From Yony Leyser’s brilliant documentary Queercore: How To Punk A Revolution to a visceral exploration of iconic artist Jean-Michel Basquiat and late 1970s New York City in Boom For Real: The Late Teenage Years of Jean-Michel Basquiat (pictured), we explore the adversity that creates community and art. We continue to look at iconic artist lives in Nico, 1988, a haunting portrayal of singer Christa Pӓffgen’s final act.

Following a memorable Canadian premiere in 2017, Videokills - The Explorer Series: Invisible City Symphonies brings back the Berlin-based artist group Videokills for a special night of international short films—created just for our festival—accompanied by original scores composed and performed by local bands.

Throughout our program, we’re including shorts from emerging local, Canadian and international directors and animators, with a selection from Sled Island 2018 guest curator Deerhoof (Hit, directed by Becky James and screening with Boom For Real: The Late Teenage Years of Jean-Michel Basquiat) and an emphasis on women filmmakers.

Tickets go on sale this Friday, April 13 at 10am MST at SledIsland.com/Tickets. Tickets for imagineNATIVE Film + Video Tour will be available later this spring.

Remember that a Sled Island pass gives you access to film programming as well as music, comedy, art and more (subject to capacity). Get yours by Monday, April 30 at SledIsland.com/Passes and you could win the ultimate Sled Island experience!