Sled Island 2013's lineup includes more than 75 artists from Calgary, over 100 from Alberta, nearly 230 from Canada and over 50 from around the world, representing a wide variety of musical tastes and influences. Every year Sled Island aims to celebrate, showcase and nurture emerging and established local talent alongside national and international independent music, visual art, comedy and film in a variety of unique spaces.

We're dedicated to providing an awesome and fun experience for music fans of all ages during the festival. From June 19 - 22 we're hosting a variety of shows that will be accessible for a younger audience at the festival's main outdoor venue, Olympic Plaza on both days, a bunch of day parties at Local 510, Broken City plus more and the city's usual all-ages venues including National Music Centre, New Black and Tubby Dog.

Created specifically with our "under 18" buddies in mind, Sled Island is proud to offer an All-Ages Pass that grants full access to the all-ages venues, including Olympic Plaza plus many more during the festival. Please note that the All-Ages Pass is for those under 18 years old only and valid ID is required at pickup. Sled Island is proud to announce the the 2013 edition of its fan favourite and hot ticket comedy program!

More details including additional acts, ticketing info and schedule to follow over in the coming weeks! 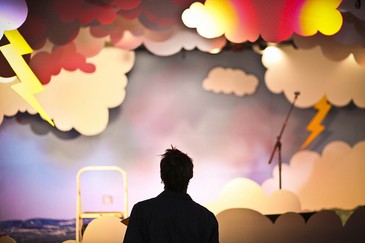 Sled Island is currently accepting art exhibition, performance, installation and design proposals for the 2013 edition of Sled Island Music and Arts Festival. This is a unique opportunity for emerging artists/designers/performers/illustrators to engage with a context that embraces the spirit and relationship between the visual arts and music in Calgary.

We’re looking for art/design/curatorial proposals that will contribute site-specific, unique, intriguing, enhanced or additional environments and experiences for festival goers to encounter at the various venues of the Sled Island festival program.

Your submission package should include:

SUBMISSION Deadline:
Friday May 10, 2013 at 7pm (Late submissions will not be considered)

Submissions can be sent via email to: art@sledisland.com

Successful submissions from the first round of consideration and review will be notified and brought in for an informal interview regarding the process.

Every summer Sled Island takes over at Olympic Plaza to create a music lover's paradise in the middle of downtown Calgary. Festival headliners perform on the main outdoor stage to a crowd of joyous fans at these city-supported events. Join us on Friday, June 21 for an evening of epic performances by instrumental post-rockers Explosions in The Sky and Montreal's dreamy psych-rockers The Besnard Lakes plus more acts to be announced. Get ready for a full day of excellent music on Saturday, June 22 with performances by legendary proto-shoegazers The Jesus and Mary Chain and the power-pop punk of Portland's The Thermals plus many more acts to come. Olympic Plaza is a licensed event, featuring an outdoor beer garden, and is welcome to all-ages! Kids 12 and under get in free!

Tickets for Olympic Plaza are on sale now here and at select retail outlets, prices are $40 for Friday, June 21 featuring Explosions in the Sky, The Besnard Lakes plus more and $50 for Saturday, June 22 featuring The Jesus and Mary Chain, The Thermals and many more. Festival pass holders gain entry to both days at Olympic Plaza and access to over 250 bands plus film, art and comedy across 30+ venues in Calgary from June 19 - 22. Festival passes are available here.

Get Your Flames Central Tickets! Flames Central is one of the premier large venues in Calgary featuring an incredible sound system and we couldn't be more excited to make use of it for Sled Island 2013! Come down on Friday, June 21 to catch performances by national treasures, Joel Plaskett Emergency and beloved Weakerthans frontman John K. Samson plus more guests to be announced. Get amped for Saturday, June 22 with performances by Divine Fits, the indie rock supergroup featuring members of Spoon and Wolf Parade and Montreal's wild crooner Mac DeMarco plus more guests to be announced.

Tickets for Flames Central shows are on sale here and at select retail outlets. Prices are $30 for Joel Plaskett Emergency and John K. Samson plus guests on Friday, June 21 and $25 for Divine Fits and Mac DeMarco plus guests on Saturday, June 22.

We're proud to unveil the Sled Island 2013 festival trailer, shot, chopped and animated by the talented folks over at Deluxe Design Group. The featured song is "Union" by Sled Island alumni, Teen Daze (ft. Frankie Rose) and it's made up entirely of footage captured during the magical 4 days that was Sled Island 2012. A taste of things to come across 30+ venues throughout the city this June 19-22... Sled Island wants to make it easy as possible for you and your friends to organize travel plans and find the best possible deal on a place to stay in Calgary during the festival from June 19 -22. Because of that we've put together these two pages, Getting Here and Accommodations to help you out.

There's a few different options on how to get here, first off, road trips are always one of the best ways to experience summer. Open highways, pals all around and saving money on gas. We've taken the liberty to create this ride share forum for anyone looking to connect with others hitting the road to Calgary for the festival. There are also several options to reach the city on the bus from services like Greyhound or Red Arrow. If you're looking to fly, now is the time to book! Whether you are flying within North America (American Airlines, Delta, United), within Canada (Westjet, Air Canada) or from further away, all major airlines fly into the YYC Calgary International Airport.

Once you get here you'll need a place to stay! Sled Island is proud to work with a number of key hotel and accommodations partners to provide artists and attendees with the best possible experience while visiting Calgary. We'd recommend the following hotels as your first look for Sled Island bookings - to find yourself amongst festival performers, The Fairmont Palliser is the place to be, if you're looking for a centrally located boutique hotel with an outdoor pool look no further than Hotel Arts, for the best of budget accommodations check out Hotelling International - Calgary City Centre and for a comfortable resting spot just outside of the downtown core look into the Hotel Blackfoot. All of these hotels have offered special rates for Sled Island attendees. Book your room today through us, these rates won't last long, we promise! Working closely with the Sled Island team, the Visual Arts Coordinator will be responsible for helping to plan, program and execute Sled Island's Visual Arts program for the 2013 edition of the festival. This is a development position, with the chosen applicant receiving valuable experience in art curation and exhibition logistics as well as insight into festival planning. The chosen applicant will receive guidance and mentorship from Sled Island staff and visual arts professionals alike.

This is a volunteer position.

If you are a student, there is the possibility to receive a $1,000 bursary from the SCIP program. Students, please apply directly through the SCIP website.

Otherwise, please provide a cover letter and up to date resume to Maud Salvi at maud@sledisland.com