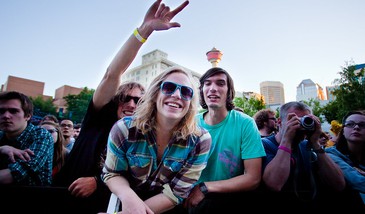 With over 250 bands, 30 venues and 40,000 attendees spread out over 5 glorious days, Sled Island may seem a little intimidating to those new to the festival. But fear not! We've polled seven Sled Island pros who have given us their best tips and tricks for taking on the festival.

Our Sled Island experts include:

"The best thing to have with you is a phone charger, either a wall plug-in or an external charger. Also, snacks." -CG

"In my backpack I always carry bandaids, a phone charger and power bank, my iPad so I can work on the go, a Sled Island program guide, a disposable camera, an extra pair of socks and a full-sized can of dry shampoo. That last one is absolutely essential." -MC

"My Sled essentials that I carry in my jean vest (bags look ridiculous on me) are earplugs, wallet, phone, bike lock keys, jammers, pen, program guide, minitool and headphones." -AK

"Earplugs are absolutely essential, and I carry multiple pairs in case someone else needs some. There’s nothing punk rock about hearing loss." -JE 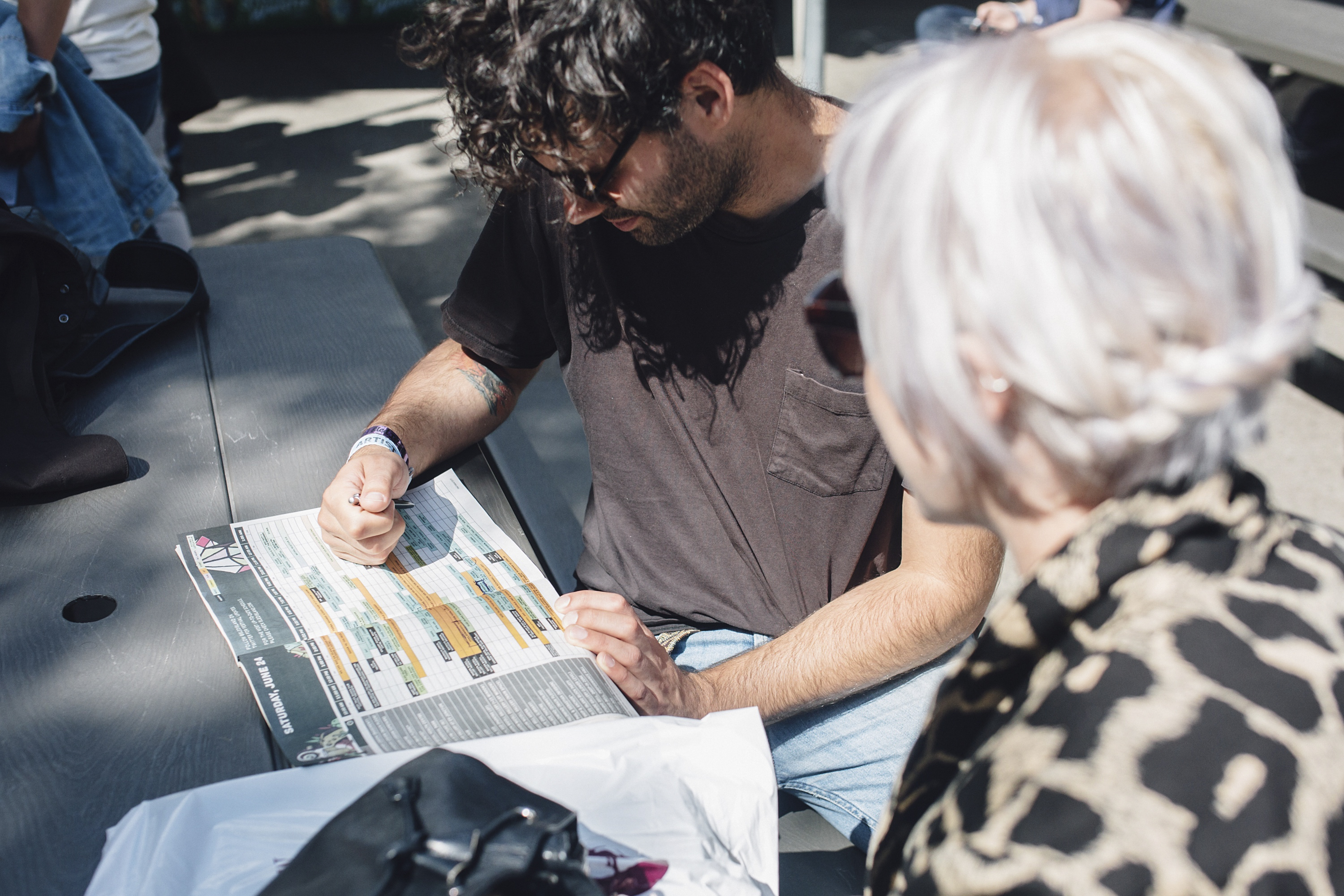 "Your plans will change and you will find yourself needing unexpected breaks. If you over plan, you're definitely going to miss things. Pick one or two things each day you'd love to see as "must-haves." Think of all your other picks as "nice-to-haves." -CG

"When researching the lineup for Sled every year, listen for recommendations from your musically-inclined friends and from CJSW programmers leading up to and during the festival. I find that personal recommendations from people who know their shit usually result in catching some compelling acts that may have flown under the radar of most people. For every night of the festival, I circle 6-8 "want-to-see" bands. I try to plan my time around those artists, but still keep myself open to discovering whatever I may be in the mood for on any particular day." -AK

"Get the pull-out schedule and circle EVERYTHING you want to see. You'd be surprised at how quickly you can move between venues when you are pumped up on musical adrenaline, so dont worry about scheduling a whole lot of travel time! Circling everything you want to see also gaurantees you have a sturdy back-up plan just in case the universe feels like messing with you a bit that day." -AN

"My schedule often looks like someone’s wall after six months of trying to identify the zodiac killer. My only real solid piece of advice is to make time and plan for meals." -JE

"I never actively built a schedule. I don’t even really look at the lineup until Day 1. I like to go into Sled Island completely blind and stumble on all the wonderful little treasures and fun hangs with pals. It’s best going with the Sled Island flow and seeing where you end up." -MG

"Don't feel like you need to be a slave to it. The most magical moments are often unplanned. It's great to map things out so you always have a back-up plan, but feel free to drop those plans and follow a recommendation or a gut instinct!" -SP 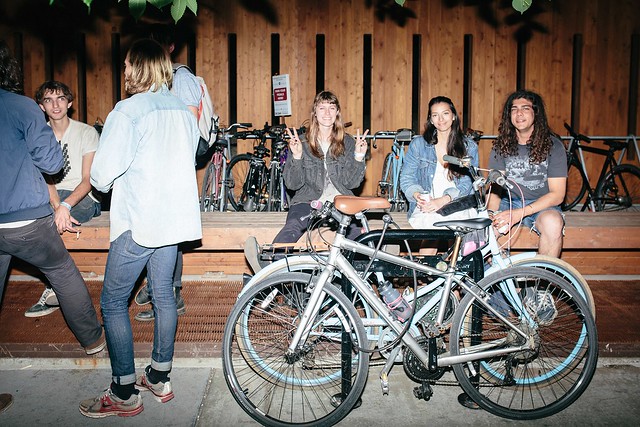 "I'll probably be using LimeBike this year when I need to. Look at venues as clusters — Commonwealth and Dickens are easy to hop between, but the best cluster is Legion-Palomino-Studio Bell-King Eddy-Central Library." -CG

"Biking downtown scares me, so I usually rely on car2go or Uber to get me where I need to go fast! But a lot of venues are so close together that I usually end up walking (hence the supply of band-aids). -MC

"100% bicycle. In point of fact, I think that events like Sled Island were the things that finally pushed the City of Calgary to construct bike lanes in the Downtown/Beltline. The thrill of riding with your pals from venue to venue has never been easier or safer." -AK

"If you have a car and plan for a sober evening, I recommend finding free street parking somewhere after 6pm and bringing a bike in your trunk! You can just travel by bike till it's time to go home for the night. If not, most of Sled's venues are pretty short walks from the train, which is always free in the free fare zone Downtown! " -AN

"Bike. Bike everywhere. Wear a helmet! There’s nothing punk rock about being struck by a vehicle." -JE

"I rely on a trifecta of bicycle, my feet and C-Train each day (Get a good lock for your bike)." -MG 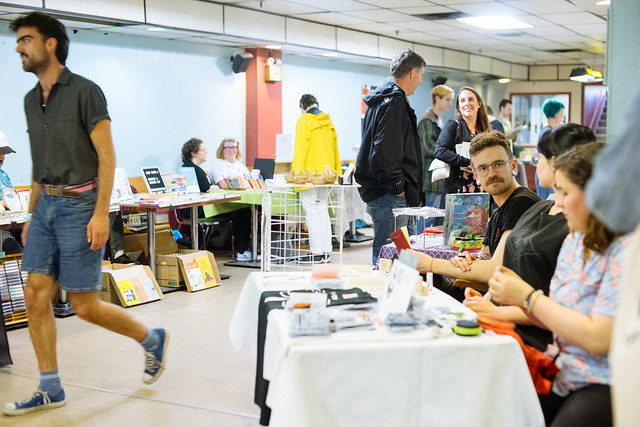 "If you don't go see The Comet is Coming at Commonwealth, you're gonna have a bad time. People will be talking about it until next year's Sled. Also, actually use your pass for discounts. I like the haircut deals the best." -CG

"Not enough people take advantage of the discount guide! Over 60 local businesses offer some wicked deals to passholders, and I try and refer to it throughout the fest for places to grab a bite to eat, have a drink, or pick up some essentials. There are also four different record stores on the list, so I tend to go a little overboard picking out some new vinyl. As far as artists go, Symfan, Justin Wright, Lemongrab, Bored Decor and Uncanny Valley are some of my under-the-radar picks." -MC

"The Sled Island Poster Show is one of my favorite components of the festival. Having visual artistic documentation of the festival is so important. What better way to keep a record of who has played the festival than beautiful silkscreened gig posters made by local artists? Also, the fact that CJSW 90.9FM hosts so many of the bands for live sessions is an amazing way to learn more about the lineup in an organic and stimulating way. " -AK

"Films! There is always a great curation of movies at Sled, and it's a great way to take a break when you've been out and about all day. Recorder: the Marion Strokes Project is going to be amazing. We Are Not an Island Queer Zine Fair (pictured) is not to be missed as well. And take advantage of the discounts! 10% off at Community Natural Foods (they have the best vegan mac n cheese that is premade so you just grab n' go!), 10% off UNA Pizza, 15% off Boogie's Burgers and 10% off Alumni Sandwiches are my favourites. " -AN

"When you’re not wrapped up in the whirlwind of beers, pals and bands, go see the visual art, zine fair and films. Keep your peepers peeled for all the other goodies you can find. " -MG

"Every. Single. Band. Comedian. Artist. Film. Special Event. Panelist. Atteendee. Volunteer. Sound tech. Venue staff. Partner. Champion. And naysayer. All of them contribute to making Sled Island magical for the past 13 years (and hopefully 13 more). But also, I really like Hairnet and Sister Suzie live." -SP 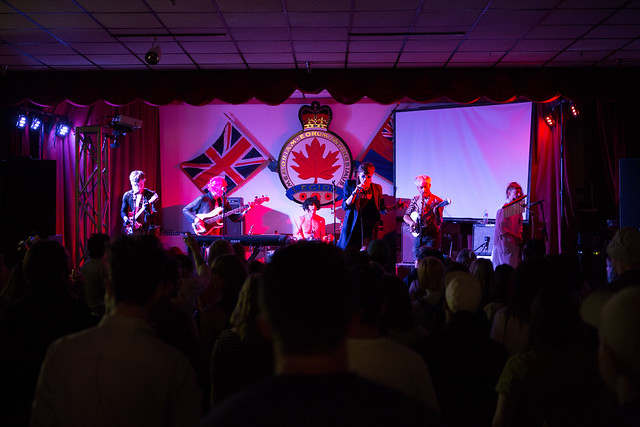 "My yearly go-to is one gourmet meal with lots of veggies somewhere around the 3/4 mark. It gives me the boost I need to make it to the end." -CG

"You can't go wrong at the #1 Legion (pictured). Two floors, eight bands, six hundred people, more wood panelling and carpeting than you've ever seen. I've never had a bad time hanging out at the Legion! Also, the sausage breakfast wrap at Deville or the avocado toast at Phil & Sebastian are my morning fuel go-tos" -MC

"Late night Thai Tai tofu subs, dying my armpit hair a silly colour, and seeing a show at the Broken City patio. I dont know if it's just me but the rowdiest, goofiest performances always go down there." -AN

"I never miss an opportunity to go to Awesome Kitchen for their Chicken Tandoori pizza. Their hours are bizarre and they’re open extremely late. It’s a bit out of the way from Sled venues downtown but worth it for the best pizza by the slice in the city. Also, every year I go to the Mint Records showcase at Commonweath. It’s an early afternoon show but the lineups are always incredible." -JE

"Every year seems so different and unique to the last that (for me) having a ritual or go-to isn’t really a thing. I try my absolute darndest to not make any plans and just see where I end up. HOWEVER, my number one absolute go-to every year is WRAP UP KARAOKE AT BROKEN CITY on Sunday night." -MG

"Tetley tea gets me through the festival. The Wrap-Up Pig Roast show is usually the only bit of music I get to see, so we make sure it's stacked with some of our favourite artists. And I love seeing the post-fest glow on all of the bands, volunteers and attendees." -SP 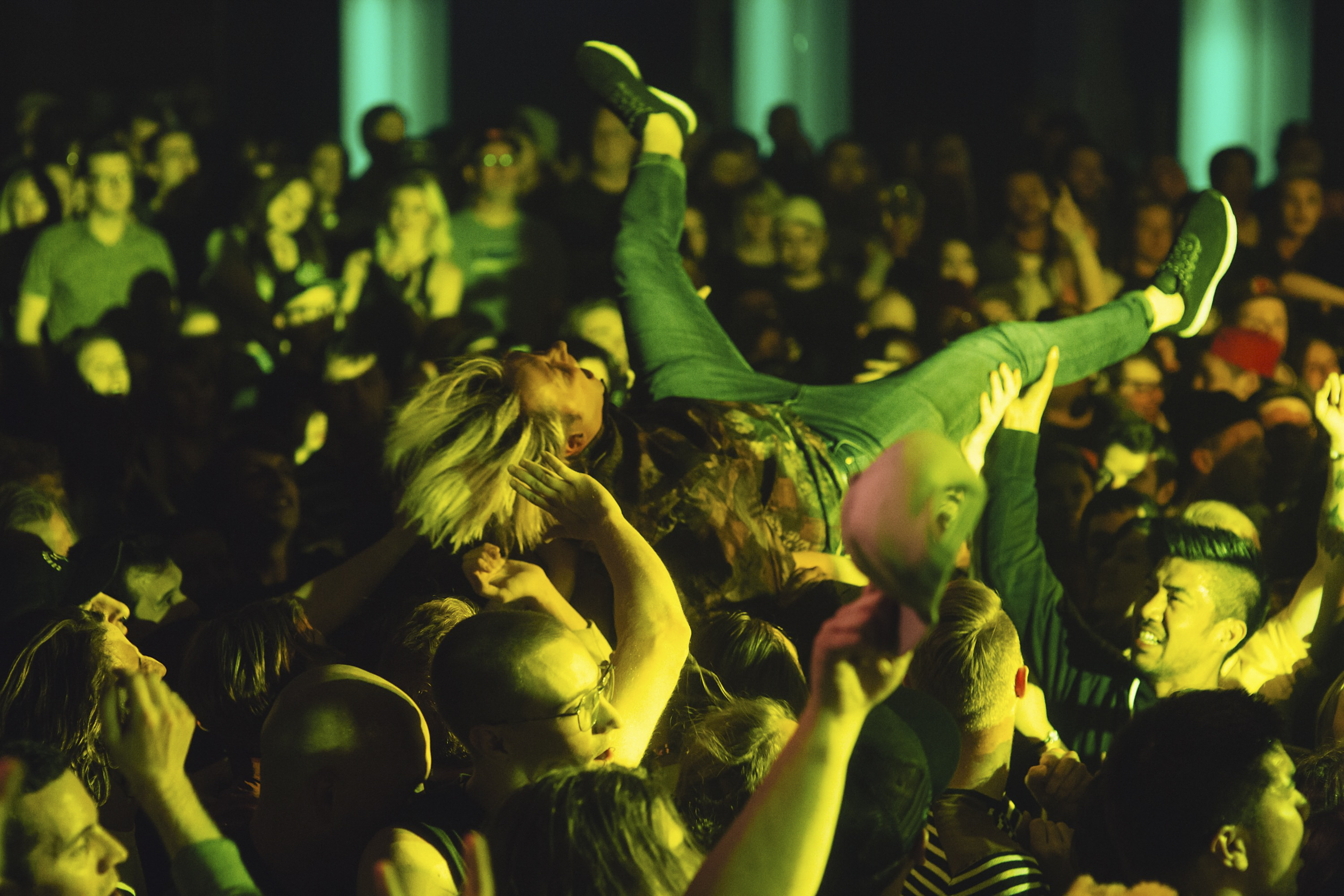 "Balance being a stickler for the things you want to see with getting goofy. Honestly, going to see something just because it's ImPoRtAnT aRtIsTiCaLlY when you know your friends are out cracking up and running around will ruin the experience anyway. Conversely, if you only hang with your friends you WILL see one of them cry and wonder why you haven't seen any bands." -CG

"Take care of your feet! Nothing will put a damper on your mood like having sore, wet or blistered feet. Always carry bandaids and extra socks and remember, Sled Island is NOT the time to be breaking in new shoes." -MC

"Be open to discovery. Not knowing everything about the entire lineup is nothing to be intimidated by. The festival is one that ostensibly directs you to plan around your established favs, but is programmed thoughtfully enough to encourage the discovery of new bands you never knew you loved. Also, be open to experiencing the festival on your own. Personally, I love running into friends at the shows, but I like to be as self-directed and independent as possible. Be your own leaf in the wind!" -AK 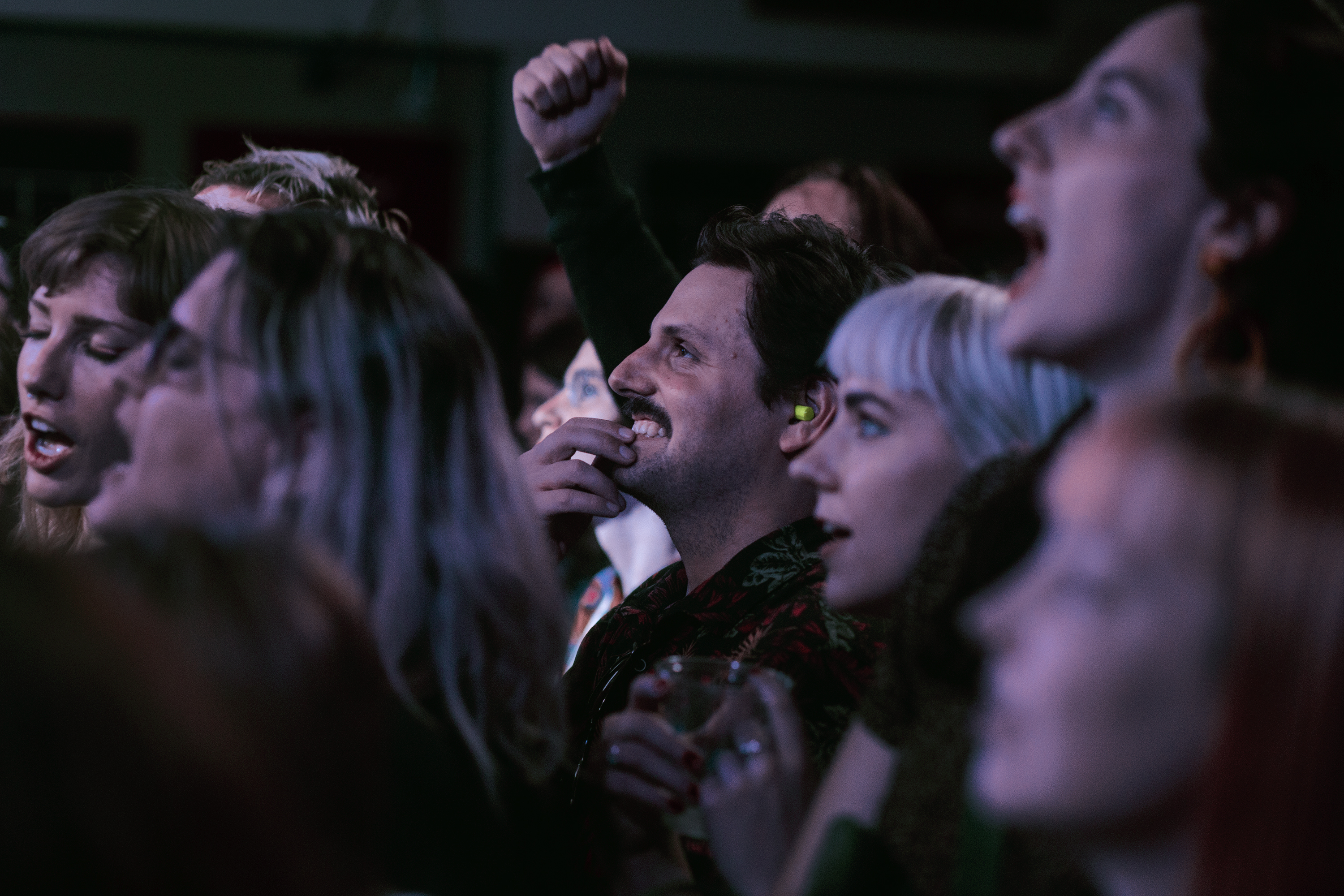 "Don't worry about planning everything to a T because life just doesn't work that way sometimes! I find that some of the best memories I have from past Sled's were due to spontaneous decisions." -AN

"If a venue looks full and a crowd looks big from the back, there’s often room upfront. If you want to get a better look, enter the crowd from the side (hug a wall and head on in). There’s almost always space on the sides of the stage, regardless of how busy the show looks. It’s also much easier to move around people when they can see you coming as opposed to when you’re behind them." -JE

"Try not to fall into the trap of thinking you're too old, out of touch, not cool enough, etc. because you don't recognize band names. People go see films without big stars because going to see films is a fun experience. People go to operas and symphonies without knowing what the words mean or who the conductor is. People try out new restaurants and foods all the time. Not knowing something isn't an assassination on your character. It's an invitation to come discover. We spend a lot of time trying to make sure that every single thing at Sled Island has the potential to be a really meaningful and fun experience for you. It won't always be, but it's the potential that makes it exciting. I think that's what I'd say - take your five days at Sled Island as an invitation to be excited." -SP