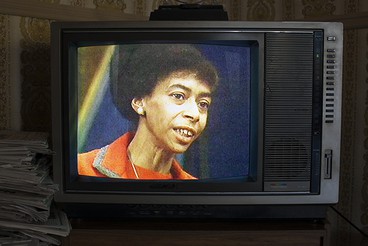 We can’t wait for you to see this mind-blowing film. Matt Wolf’s 2013 documentary Teenage, an innovative documentary about adolescence, was one of the most talked-about films we’ve screened at Sled – and we’ve been eagerly anticipating Recorder ever since. It’s the story of Marion Stokes, who secretly recorded television 24 hours a day for 30 years. Her 70,000 VHS tapes capture history in a way no one else has. Unbeknownst to the public, networks have largely disposed of their archives, but Marion caught it all. Before fake news, she captured the truth. Triumphs, catastrophes, talk shows and commercials.

It’s a mystery in a time capsule and it’s endlessly fascinating. It’s about a radical Communist activist who became a fabulously wealthy recluse archivist and paid a profound price for dedicating her life to this visionary, maddening project. Recorder also features music by Sled Island alum Owen Pallett.