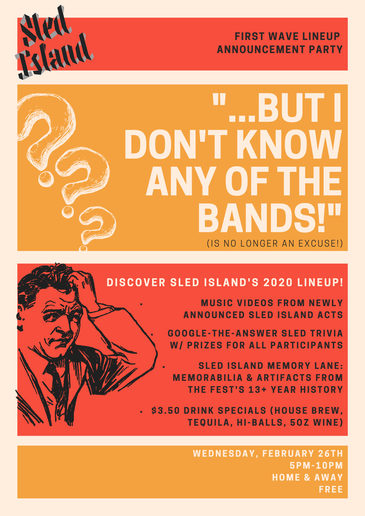 Thank you to everyone who came out to our first wave lineup announcement party, and to those who took part in our unqiue Sled Island Google-the-answer trivia! For anyone who missed it and wants to see what the challenge looked like, check it out! For those who participated and are dying to know the answers, see below!

Congratulations to Nathan Ross and Jessica Pickering for being the big winners of the night and scoring two Discovery Passes to Sled Island 2020!

1. “I’m too old for Sled Island” no longer applies. Which now famous new-wave and post-punk band opened for the legendary Sun Ra all the way back in 1975 in Cleveland?

2. Transcendental metal band OM released a 35 minute Live In Jerusalem album, which represented just a fraction of the set they played that night. How long did the band actually perform for?

3. Which newly announced artists has had a song featured in the critically acclaimed HBO series Insecure?

A three-parter for you! Austin’s The Black Angels may be the torch-bearers of neo-psychedlia, but they never forget their roots. Looking into their past...

4. The Black Angels got their name from which influential 1960s band?

5. In 2008, The Black Angels performed as the backing band for which artist, arguably responsible with his previous band for the creation of psychedelic rock music?

6. The Black Angels are no stranger to festivals, in fact they started their own! Before it was known as Levitation, this psych rock-focused festival was called what?

7. Stranger Than Fiction? In season 3 of a Netflix political series, members of Pussy Riot made a much-publicized cameo appearance. What was the show and which members were featured?

9. Kelela, who last performed at Sled Island in 2013, brought greater attention to which Sled 2020 artist by featuring them on her 2018 remix album, Take Me A_Part?

10. Which musician that performed at Commonwealth for Sled 2019 also performed in the Sun Ra Arkestra?

SHABAKA HUTCHINGS (THE COMET IS COMING)

11. Sudan Archives is Sled Island’s 2020 Guest Curator (and we couldn’t be more excited). List all of Sudan Archives’ selections that reside in Los Angeles.

WE ACCEPTED THE FOLLOWING ANSWER:

(AS LOS RETROS ARE TECHNICALLY FROM OXNARD AND JAMIRE WILLIAMS CURRENTLY RESIDES IN LOS ANGELES, BUT IS OFTEN LISTED AS FROM NEW YORK)

12. The latest single from Diet Cig, “Night Terrors” came out on which label started by a member of Sled Island alumni Les Savy Fav?

13. In the trailer for the Lydia Lunch documentary the War Is Never Over, everyone from L7’s Donita Sparks to Sonic Youth’s Thurston Moore sing her praises. Which Sled Island 2015 artist professes: “Lydia is a fucking doctor. Her kind of medicine is just a punch in the fucking face?”

14. In the Adult Swim episode Joe Pera Shows You How To Dance, the wholesome comedian demonstrates the importance of incorporating clothing into a dance routine. What piece of clothing does he play guitar with?

15. Grouper’s Liz Harris returns to Sled Island in 2020 as Nivhek after a sold-out performance at Studio Bell in 2018. Which two acts opened for her?

16. Eyebrows may have been raised at first with the selection of Show Me The Body by Sudan Archives, but it tracks! They are unlike pretty much any other hardcore band on the planet. What unconventional stringed instrument does the band incorporate into their setup?

17. Able to stomach Pitchfork’s notoriously wordy reviews? In their review of Liturgy’s H.A.Q.Q., the website says the band’s wild expanses of black metal are buttressed by a choir of which two instruments?

18. Diet Cig have a song called “Barf Day” that features the lyrics “I just wanna have ice cream on my birthday,” and that rules. According to a 2017 Spin interview, what ice cream flavour is preferred by Alex Luciano?

20. Sled Island 2020 will represent what edition for the festival?

14TH (WE ACCEPTED THOSE WHO POINTED OUT THAT 13 OR 13.5 WAS TRUE BECAUSE OF THE CANCELLED EDITION OF THE FESTIVAL TOO)

22. In 2014 local brewery Big Rock produced a special Sled Island can for which beer of theirs?

23. Not so small, huh? In 2015, an economic impact study produced by Canadian Sports Tourism Alliance showed that Sled Island generated how much in economic activity for Alberta that year?

25. Which now mainstream Canadian rock band was first on a bill of 5 opening for Tricky Woo in 2009 at Vern’s?

26. How many Sled Islands has everyone’s favourite hot dog joint/punk rock venue Tubby taken part in as a venue?

11 (WE ACCEPTED ANSWERS THAT WERE CLOSE BUT SPECIFIED THINGS LIKE THE CANCELLED FLOOD YEAR, ETC.)

28. Which Calgarian act was signed to Sub Pop after Shabazz Palaces saw their Sled Island set at the #1 Legion?

29. Sled Island’s office may lack windows, but it doesn’t lack good intentions and people. Name one of the two organizations that shares the office space.

(WE ACCEPTED THOSE WHO ANSWERED GREEN EVENT SERVICES, NOT KNOWING THAT THEY MOVED OUT RECENTLY)

30. Who was Sled Island’s first guest curator and name at least one project he’s been in.

31. Which band has played Sled Island more times than any other? Hint: our website lists ‘em all!

Pour one out (not physically, we don’t want Home & Away to have to clean up after us) for those that are no longer with us.

Please take a moment of silence and list any venues you can think of that have taken part in Sled Island that no longer exist in 2020.

THE LIST IS LONG AND CAN BE FLUID BASED ON IF THE BUSINESSES STILL EXIST BUT NO LONGER DO SHOWS, OR STILL DO SHOWS IN THE SAME SPACE, BUT CHANGED OWNERSHIP & NAME

In the very unlikely event that multiple trivia players still tie for the high score, we’ll use this question as the tiebreaker.

Since its inception, Sled Island has showcased how many unique bands at the festival (not double counting artists that have played multiple years)?

The closest, without going over, wins!