Start getting excited! The first wave of Sled Island 2019 artists is here! 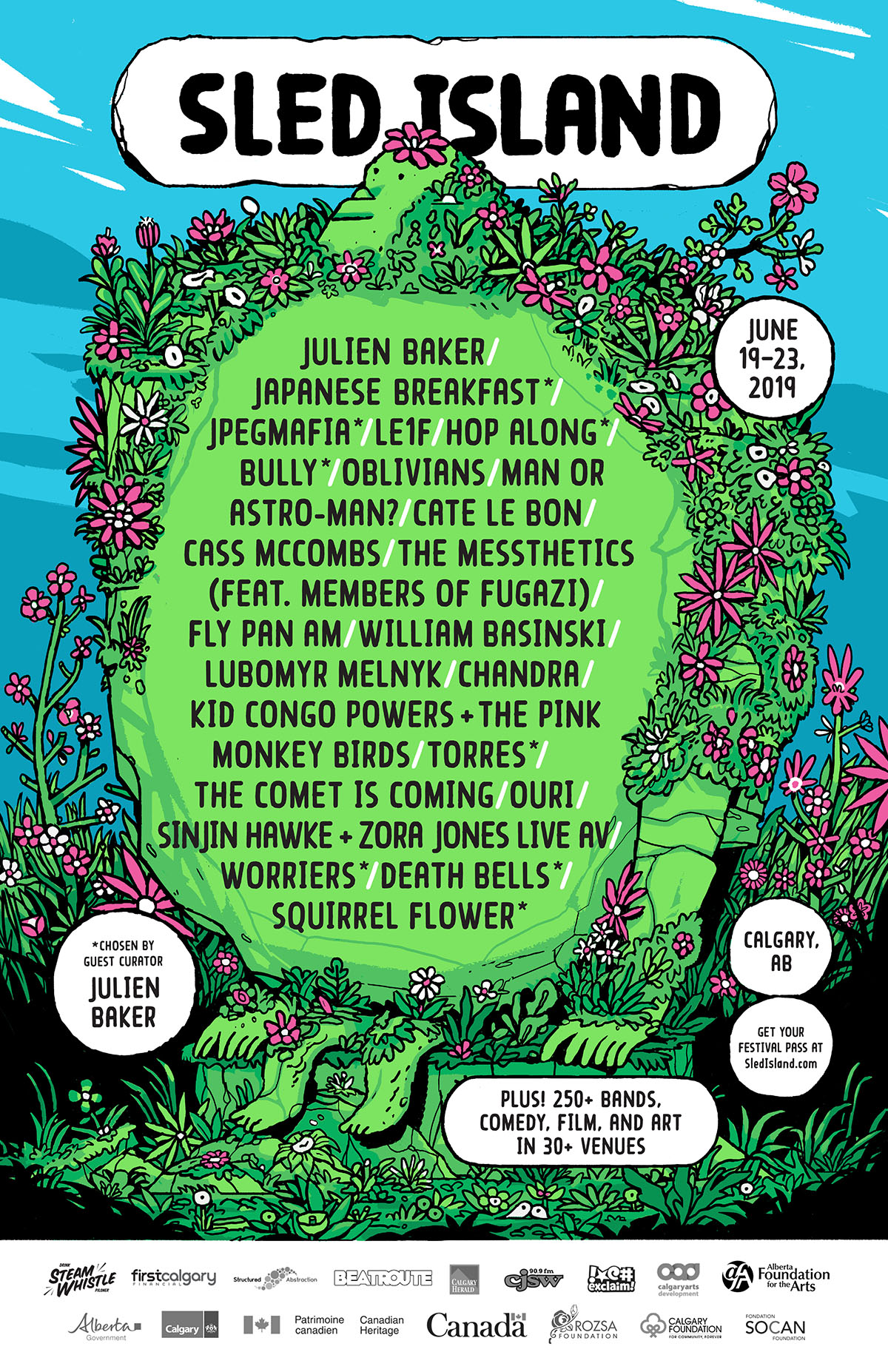 This year, acclaimed indie singer-songwriter and Sled Island guest curator Julien Baker is joined by a diverse gathering of some of today's most exciting artists. This cross-section includes Japanese Breakfast's shimmering space-pop, the politically-charged, experimental noise-rap of JPEGMAFIA and the subversive trap-influenced hip hop of Le1f. The perfectly-penned tunes of raspy alt-rockers Hop Along are paired with the anthemic grunge rock of Bully, and the undeniable free-form brilliance of Cate Le Bon is met with the idiosyncratic folk-rock of Cass McCombs.

In addition to these much buzzed-about artists are bucket list acts who have already left an undeniable mark on music history. The garage-punk godfathers themselves, Oblivians, are flanked by the psychedelic surf rock sounds of Man or Astro-Man? and honest-to-goodness punk rock legend Kid Congo Powers + the Pink Monkey Birds (The Gun Club, The Cramps, Nick Cave and the Bad Seeds). Sled Island is ecstatic to announce that post-Fugazi instrumental trio The Messthetics will join recently reunited Montreal experimental rock outfit Fly Pan Am. Chandra, the post-punk sensation that first fronted a band at the age of 12, returns to wow audiences after three decades away from music.

The first wave of acts continues with a mix of experimental, audio visual and live freakouts including illustrious pianist and composer Lubomyr Melnyk, whose ability to play 19.5 notes/second is unverifiable by the human ear, and highly-regarded avant-garde composer William Basinksi. It's difficult to judge which will be the most revelatory live set of the festival: the experimental and spectral RnB of Ouri, the innovative audio-visual mind-melt of Sinjin Hawke + Zora Jones Live AV or the electro-psych and nu-jazz stylings of The Comet Is Coming.

Sled Island’s complete 2019 lineup, including additional headliners, over 225 more bands as well as comedy, film, visual art, special events and conference programming will be announced soon! For now, start checking out these newly announced artists through our web player, or visit our Sled Island 2019 Spotify playlist!

A friendly reminder that today is your last chance to save 15% on Sled Island passes! Prices jump at midnight MST tonight. Also, for those who are looking to break up their spending we are still offering a four-month payment plan. In order to qualify, your initial purchase must be made before April 15, 2019.

For those who can't attend the whole festival, a limited number of single tickets to select Sled Island 2019 shows will go on sale this Friday, February 15 at noon MST.

Huge shout out to Josh Holinaty for the amazing poster art!