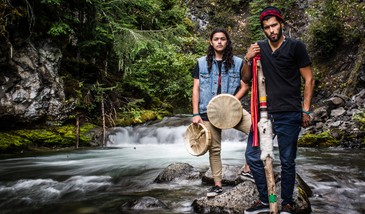 Join us and partners Indigenous Resilience in Music, Drum Beat, imagineNATIVE, Treaty 7 Film Collective, CBC Calgary and Arts Commons for a day of events at Arts Commons, beginning with a Mini Pow Wow at 11:30am. At 1:00pm, there will be a Rhythm of the People workshop with Sled Island 2018 artists Snotty Nose Rez Kids and Mob Bounce, who will present a talk, conduct a writing workshop and give a mini-performance. At 5:00pm, catch the imagineNATIVE Film + Video Tour, featuring shorts made by Indigenous filmmakers from across the country. All of these events are free and open to the public on a first-come, first-served basis.

Tickets to the Commonwealth show are on sale now. Passes also grant entry (subject to capacity).