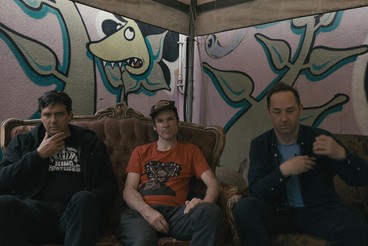 THIS FILM SHOULD NOT EXIST: A DOCUMENTARY ABOUT THE COUNTRY TEASERS & THEIR 1995 TOUR WITH THE OBLIVIANS

A music doc about the 1990s art-punk band Country Teasers, following their 1995 European tour with The Oblivians, preceded by a Q&A with the directors and a Sled Island music video package featuring Pale Lips and The Mandates. Following the screening on Tuesday, the film will be available archived from Calgary Underground Film Festival's website.

THIS FILM SHOULD NOT EXIST is a slight-of-hand trick replete with all the details of a rock documentary. Archival footage from the orgiastic 1995 tour with The Oblivians and stories of everyday life leads the audience down a familiar path, and with a delicately insistent grin, transports us somewhere else completely. Echoing the artistic path taken by Ben Wallers, the film winds through the underground world of the 1990's garage rock band Country Teasers to form a portrait of a man, musician, and leader.
--
Nicolas Drolc is an independent filmmaker based in Nancy France. in 2014 he released his first feature length documentary SUR LES TOITS (ON THE ROOFTOPS) a film about the prison riots that shook France in the early '70s. In 2017 he completed a second feature film DEATH MUST BE EARNED, a portrait of Serge Livrozet, a figure of French '70s counter-culture, former safe-cracker, prisoner, writer, and anarchist activist. BUNGALOW SESSIONS was his third feature documentary completed in 2019. It is a portrait of six Amercian folk/blues underground musicians. Drolc produces, directs, shoots and edits on his own, with his company Les Films Furax, which is committed to existing entirely outside the stronghold of the television system and corporate interests.

Gisella Albertini is from Turin, Italy. Along with director Massimo Scocca, throughout the '90s they went around Europe and the USA hunting for gigs of underground lo-fi/garage-punk bands and filming them with a video8 camera. Gisella was hooked on music and records for as long as she can remember. Since the '90s she’s done interviews for music ‘zines, ran a mailorder of obscure B-movies, organized gigs and played in garage bands, like lo-fi duo Two Bo’s Maniacs.

Massimo Scocca is from Turin, Italy. Along with director Gisella Albertini, throughout the '90s they went around Europe and the USA hunting for gigs of underground lo-fi/garage-punk bands and filming them with a video8 camera. Massimo has a long-time interest in photography, music and cinema. He wrote about rock’n’roll and pop culture, shot photos for ‘zines and books, and still plays in blues punk bands – most notably Two Bo’s Maniacs and LAME.