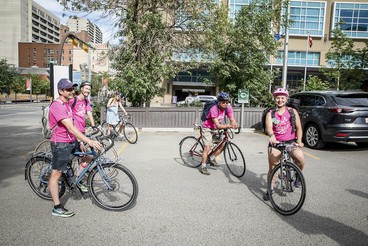 While frantically biking from venue to venue to catch as many bands as you can may not be physically possible this year, we're offering the next best thing with an all-new Sled Island Bike Scavenger Hunt designed to mimic the same venue-hopping fun. We encourage you to -- if possible -- get off the couch or away from your screen for an afternoon or two, hitting as many spots around town as you can, discovering standout photos from our history displayed at our venues, all for a chance to win some Sled Island swag.

...each eligible photo will count as an entry into a grand prize draw for:

We also recommend picking up a helmet from our good friends over at Prohab. They offer pay what you can helmets to the Calgary area. We share office space with them and they are fantastic people who are dedicated to looking after your noggin' no matter what.

The Prohab Helmet Society is a non-profit organization dedicated to promoting and providing helmets to cyclists who are not wearing them. We encourage safety and strive to break down any image barriers associated with the use of bike helmets and protective gear. We love fun, and being safe while having it. Our helmets are offered in exchange for a donation of any amount to Prohab.

Prohab Calgary was started by Lindsay Shedden and Shane Rempel, after a successful partnership with the 2011 Sled Island Festival, where over 120 people received new helmets by donation. Since then Prohab Calgary’s presence has grown exponentially. Shane, Lindsay and mostly everyone else who is involved with Prohab Calgary are inspired by having experienced the loss of Dan Winnick, who succumbed to his injuries after he was involved in a cycling accident while not wearing a helmet. Prohab Calgary is currently involved with number of local cycling initiatives to spread our message to younger communities.

With the support of great pals, the community and through various fundraising efforts we strive to encourage people to wear helmets.
Through our relationship with our current partner, Nutcase Helmets, we hope to grow awareness and get some nice looking lids onto people’s heads.