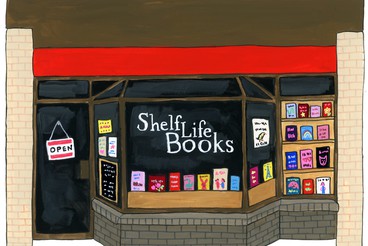 Knowing it may be some time before we can all gather in intimate spaces to experience live music again, we will have to reconsider the ways we discover vital music & art and learn about the city we live in. Luckily for us, our good friends at one of the best book stores in the country has agreed to share Sled Island-appropriate reading lists, featuring books by or about the artists, scenes and communities the festival has represented. In addition, Sled Island and Shelf Life have partnered with Sue's Stokvel to provide a recommended reading list of highly recommended black authors.

SHOPPING INSTRUCTIONS:
Shelf Life's inventory can be browsed at store.shelflifebooks.ca and orders include CONTACTLESS CURBSIDE PICK-UP or FREE LOCAL HOME DELIVERY (some restrictions may apply).

Shelf Life is open for BROWSING BY APPOINTMENT from Monday to Sunday from 11am-5pm. Please call 403-265-1033 or email contact@shelflifebooks.ca to book your browsing now! CONTACTLESS CURBSIDE PICK-UP and FREE LOCAL DELIVERY remain ongoing.

ABOUT SHELF LIFE BOOKS
(Illustration by Jane Mount)
Come and browse in our lovely bookstore in Calgary’s revitalized Beltline District. You just might find the book you’re looking for, but you’ll also find books that you haven’t seen anywhere else.

We’re devoted to good writing and literature of all kinds: fiction, genre fiction, history, science, biography, philosophy, psychology and more. We also carry art, photography, children's books and graphic literature. Our poetry section is the largest in Western Canada. There's a reading or event happening in the store almost any week of the year. - Shelf Life Books

ABOUT SUE'S STOKVEL
I've always loved reading. My Grandmother used to give me books to read when she was tasked with looking after me over the holidays. A babysitting strategy has become a passion of mine and I wanted to share it with others, so I created a physical book club based in Calgary, Alberta. Since then, I've expanded the bookclub to include online members from all over the world through an instagram created shortly after. Chimamanda Ngozi Adichie's famous TED Talk "The Danger of a Single Story" best captures my experience with literature as an African woman. I recognize the collective and the very personal danger of these single stories. Sue's Stokvel, not only aims to uplift the voices of POC Authors, but to uplift the community of people who will read these books. - Sue-Shane