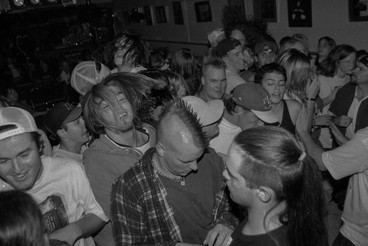 FIVE BUCKS AT THE DOOR: THE STORY OF CROCKS N ROLLS

An indie-rock oasis in the Boreal forest. FIVE BUCKS AT THE DOOR: THE STORY OF CROCKS N ROLLS shares the history of how a bar in the middle of nowhere put Canadian music on the map.

In the mid-’80s and early ’90s, the heyday of indie rock, one unlikely venue became the epicentre of Canadian pop culture. In spite of its location, or perhaps because of it, Crocks N Rolls was one of the country’s premiere live music venues. Located in Thunder Bay, Ontario, atop the iconic Highway 61, Crocks (as it is affectionately called by its patrons) was a bridge for East and West coast musicians crisscrossing their way through the country. The story focuses on those pre-internet days of the D.I.Y. punk rock culture and grassroots alternative movement. The film talks with seminal independent Canadian musicians – Sook-Yin Lee, Dave Bidini, Bob Wiseman, Ian Blurton, Lucy DiSanto, Slo'Tom Stewart, Mike McDonald, Steve Loree, Dave Ullrich – each having a personal connection to the venue and its owner Frank Loffredo. A well-loved curmudgeon, known for his curly mullet and unfiltered approach to small business ownership, Frank decided to turn his family-owned Italian restaurant into a premiere "must-play" venue, hosting some of the most influential artists in hardcore, punk rock and independent music and becoming a champion for live music. All roads lead to Crocks, and 30-years later its impact is still being felt.

Live World Premiere on June 24 at 6:30pm feat. a Q&A with director Kirsten Kosloski. The film will be available on-demand the following day.

DIRECTOR'S BIO
Kirsten Kosloski is a documentary filmmaker, media artist and educator. Originally from Thunder Bay, Ontario, she turned a passion for pop culture into a career, and has spent most of her adult life obsessing over music and film. She has been a music writer, film critic and editor at FFWD, Calgary's alternative weekly. In Thunder Bay, she founded the artist-run media arts collective, North Light Media Collective, and has directed and produced two documentaries about the Northwestern Ontario region. FIVE BUCKS AT THE DOOR: THE STORY OF CROCKS N ROLLS is her second feature film.