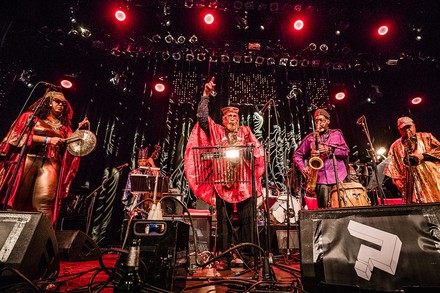 There aren’t many musical groups that are still going strong 27 years after their leader’s death, but then again, there aren’t any groups in the universe like the Sun Ra Arkestra. Since the passing of Sun Ra in 1993, the pioneering afro-futurist, avant-garde big band has been spreading the immensely influential music and philosophy of their late bandleader, Le Sony'r Ra.

With an ever-flexible line-up and a gargantuan catalog of music spanning cosmic jazz to disco to free jazz to bop, Sun Ra’s influence can be seen in every corner of contemporary music. From contemporaries like John Coltrane, to indie icons Yo La Tengo, to punk forbearers MC5, Sun Ra’s influence is so far-reaching, it’s hard to imagine modern music being the same without him.

Despite having members that have been in the group since 1958, The Arkesta has maintained its reputation as one of the most progressive acts in music. Featuring line-ups that range anywhere from 12 to 20 musicians, afro-futurist outfits that could be a show on their own, and chops that are as otherworldly as Sun Ra himself, the Arkestra’s live show is a pure distillation of the spontaneity and electricity of Sun Ra’s compositions.

Recent years have found the Arkestra doing everything from performing a six-night residency at Radio City Music Hall as part of Solange’s backing band, to becoming a festival mainstay in their own right. It’s a testament to Sun Ra’s music that seeing the Arkestra now, is just as vital as it was 60 years ago.

INTO Sun Ra Arkestra? CHECK THESE OUT: