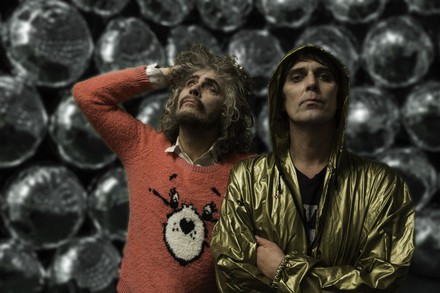 Three-time GRAMMY winners, The Flaming Lips continue to dazzle on record and on stage.

“If you were to make a list of bands that would be active three decades later –let alone ones that would eventually sign with a major label, sell millions of records, appear in TV commercials, and record with teen pop idols – the Oklahoman trio with bad haircuts and a bizarre sense of humor would have been very low on the list. If you were told they would accomplish all of that without changing their idiosyncrasies, that would sell millions of records while getting weirder and more eccentric along the way, it would have been utterly unthinkable. There was simply no precedent for a band like The Flaming Lips.” – Rolling Stone

“The Flaming Lips situate their music in extreme contrasts: humanism and horror, Day-Glo colors and widow’s black. Much of ‘Oczy Mlody’ is gentle but disturbing… whimsical.” – The New York Times

“Three decades into the Flaming Lips career, the Oklahoma City psych rock heroes remain difficult to pin down. The Lips output remains consistent in its urgency. ‘Oczy Mlody’ is as weird as you want it to be.” – Noisey / Vice