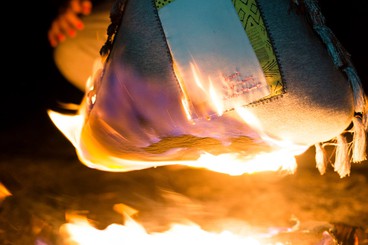 Signed, Your Loving Secret Admirer I

Signed, Your Loving Secret Admirer is an experimental, multimedia performance that is scheduled to erupt on the opening night of Lisa Lipton’s solo exhibition: The Impossible Blue Rose at The New Gallery. Moving between dual venues, the #1 Legion (basement) and The New Gallery, Signed, Your Loving Secret Admirer features simultaneous film screenings, live drumming performances, musical embellishment and character reenactments. Emerging from an extensive road trip and solo drum journey across North America, Signed, Your Loving Secret Admirer bridges the psychological depths of travel with a revolving world of impossible blues, blast beats, broken dreams and romance driven to madness. Follow the choreographed gestures of love and hate, hope and fear, frustration and rage, in a movement that will challenge viewers to go the distance and follow one beat to get to the next.

ABOUT THE ARTIST:
Lisa Lipton (a.k.a. FRANKIE) is a multidisciplinary visual artist, drummer and director from Halifax, Nova Scotia. Her work explores the potential for crossing genres of film, mixed media installation, performance, theatre, music and drumming. Lipton’s work engages collaboration and pushing the psychological boundaries of hope and fear, love and rejection, life and death. Lipton has exhibited her work on both a national and international level, and most recently served as a Longlist representative for the Maritime Provinces in the Sobey Art Awards (2015).