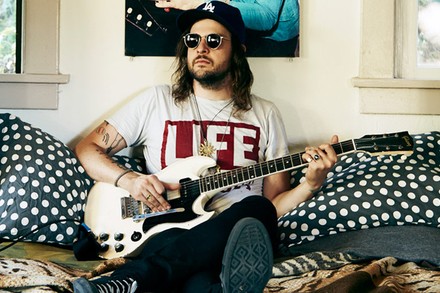 Sometime during the mid-2000s, a few indie publications declared the electric guitar dead—the synth was the cool kid in the cafeteria and everyone wanted to sit next to it. King Tuff evidently never got that message. The self-styled, longhaired emperor continues to be one of the finest strongholds of wailing guitar solos and fuzzed-out histrionics that seem simple and straightforward, but can drive you inside-out with madness. Signed to West Coast luminary labels Sub Pop and Burger Records, King Tuff’s music combines the best parts of ‘70s rock and roll occultism—backwards messages embedded in his songs and a swirling desire to break everything that boring people hold dear—with soulful guitar affectations picked up from his good pal, Dinosaur Jr.’s J. Mascis (with whom he also plays in Witch). There’s a wonderful mysticism draped around King Tuff, shrouded behind those iconic round sunglasses and underneath his bedraggled trucker hat. His latest album, Black Moon Spell, is a stick-and-poke séance at midnight, a 5-pack (he drank the sixth before you left the store) of cheap beer foamed all down the front of your shirt, a love song to that special someone across the bar who breaks all the rules.