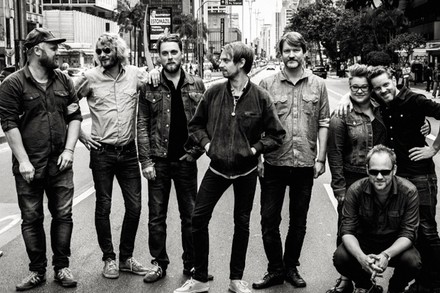 Jaga Jazzist's music is like an intricate system of pulleys and levers, the outcome of which is a sonic journey that leads to unexpected places. This nine-piece outfit from Oslo, Norway is at the helm of experimentation, blending elements of jazz, electronics and progressive rock with all of the bells, keys and whistles you can imagine. Their songs are complex, cinematic epics that rise out of single notes and build into vibrant mosaics,, using an arsenal of horns, synthesizers, guitars, drums, xylophones, marimbas, strings and more, with most hovering close to 10 minutes in length. Founded in 1994 by brothers Martin and Lars Horntveth, the project has developed a dedicated following thanks to explosive live performances of their interpretive and meticulous music. Accordingly, over 20 musicians have been a part of Jaga Jazzists’s 20 years of music making, resulting in a highly collaborative array of sound and varying direction. To date, the collective has released six full-length albums under London-based record label Ninja Tune, many of which have been ranked as the best jazz albums of recent years. Their most recent full-length release, Live with Britten Sinfonia, is an ambitious live album described as “a psychedelic Bond soundtrack twisting and turning from the stage, propelling the listener forward on an epic emotional voyage.” Jaga Jazzist are a talented vessel, transporting listeners through explorations of sound.