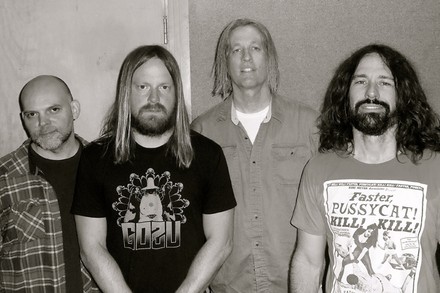 Upon initial consideration, you may not think that three-button golf shirts would be synonymous with dune buggies, but the dapper dust-devils from Fu Manchu will assure you that nothing could be further from the truth. Emanating a heavenly hum that threatens to shatter glass and eardrums alike, these original Orange County outlaws are known to patrol the highways of the West Coast in their decked out boogie vans. No strangers to the need for speed, Fu Manchu has been in the business of churning out the surf-tinged rock anthems for 20 years. With titles like "No One Rides For Free," "Daredevil," "Action is Go!," "King of the Road," "Start the Machine," and "California Crossing" to their credit, it comes as no surprise that this vitriolic quartet relishes every opportunity to put the pedal to the metal. When the asphalt’s risin’, nobody makes the prospect of "Eatin’ Dust" more palatable than guitarist/vocalist Scott Hill and company. That’s not to say that they don’t have a more chilled-out side, though: A band that made their debut on the Bong Load Custom Records label certainly wouldn’t cough at the thought of an afternoon of Robot Chicken and dumplings. Eleven albums later, Fu Manchu remains a resilient and relevant facet of the American hardcore punk landscape. While they have ventured beyond the horizons of their alt-metal origins over the course of the past two decades, their reverb-fed wanderlust has certainly led them to some magnificent vistas.

*Individual tickets for Fu Manchu at Dickens are now sold out. Passholders admitted subject to capacity. A second Fu Manchu show will be taking place at The Palomino and has been reserved for our passholders only due to the intimate setting. Passes are on sale now.*