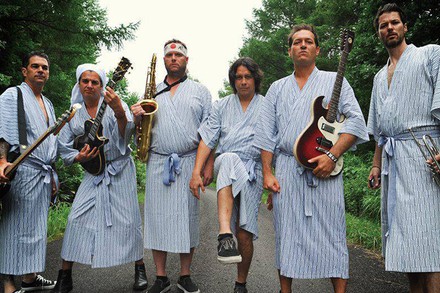 Rocket From The Crypt are the world’s greatest live rock & roll band. Normally, we’d start that phrase with “arguably,” but, while competition might come from frontman John Reis’ “other bands” (Pitchfork, Drive Like Jehu, Hot Snakes, The Sultans, The Night Marchers, etc.), after witnessing the horn-backed, relentless and self-contained party rock that is RFTC, there’ll be nothing to discuss. Also, the band probably trademarked the phrase anyway. One of the festival's most requested acts following their 2013 reunion, the San Diego outfit returns to Calgary after their lone 2003 appearance.

"We invented this type of music," Reis declares..."it's called rock'n'roll." He's half right: What RFTC really do is rock'n'roar-- you don't so much listen...as brace yourself for their rib-bruising onslaught of sax and violence.” - Pitchfork