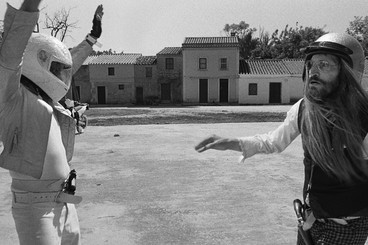 Follow avant-garde musician, artist, writer, director, and actor: Vincent Gallo (Buffalo ’66, The Brown Bunny) as he plays The Pusher/Sherriff DJ in this black-and-white surrealist Techno Western twist on Werner Herzog’s The Enigma of Kaspar Hauser (1974). An androgynous, topless, and headphones wearing Kaspar Hauser, played by Silvia Calderoni, washes up on an isolated Mediterranean shore. Seemingly having no previous contact with society, Hauser (Calderoni) becomes a pet of sorts to The Sherriff DJ (Gallo), who decides to teach the newcomer the trade of “The DJ” only to throw off the fragile balance of the island’s ruling powers. Set to the rhythms of Vatlic, Manuli’s version of this classic folklore is a totally bonkers cinematic experience.

Director's Bio: Davide Manuli (1967, Milan, Italy) studied at the Lee Strasberg Theatre & Film Institute in New York. He acted in THE CONTENDERS (Tobias Meinecke, 1993) and in Peter Del Monte’s NELLE TUE MANI (2007), which won a Golden Globe. As a director, he was awarded the international critics' prize at the Locarno film festival for his film BEKET (2008). He was inspired by some classics like: “EL TOPO” by JODOROWSKY, “STALKER” by TARKOVSKY, “ALPHAVILLE” by GODARD and “DEAD MAN” by JIM JARMUSCH.