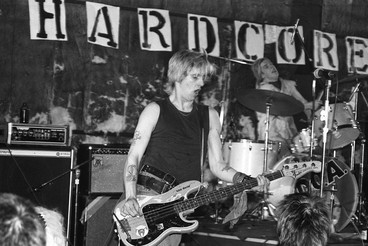 Bloodied But Unbowed is the first in-depth look at the unique and creatively blazing Vancouver punk scene between 1977-1982. Touching on universal themes of alienation, rebellion, loss of innocence & regret, it is a true document of a scene marked by raunchy humour, illuminated via vast archival performance footage and commentary. Leather, spit, beer, drugs, sex and  righteously-enraged music terrified the mainstream in Vancouver in the 70s. Bands like DOA, Subhumans, Young Canadians, Pointed Sticks, Modernettes, UJ3RK5, and the Dishrags, helped forge the city’s reputation.

On the heels of SkateGirl and 49Degrees, Susanne returns with her first documentary feature, Bloodied But Unbowed - aka “thepunkmovie” - profiling the early punk scene in Vancouver as told by the surviving legends. Susanne was a DJ at UBC’s CITR radio in that era, and she participated in the first live late-night cable music show Nite Dreems. Susanne has developed and produced many educational programs for young audiences in areas of social justice. Susanne broke out as a director with 49Degrees, a documentary on the subculture of Canadian surfing. FUELTV Los Angeles picked up the doc and invited Susanne to enter a filmmaking contest. Ultimately, she was one of 10 directors chosen from 250+ to get a film greenlit; the result was SkateGirl (FoxFUEL) a history of women’s professional skateboarding. Susanne was born on Vancouver Island in Nanaimo and lived in Tokyo & Victoria before moving back to Vancouver to study International Relations at the University of British Columbia.